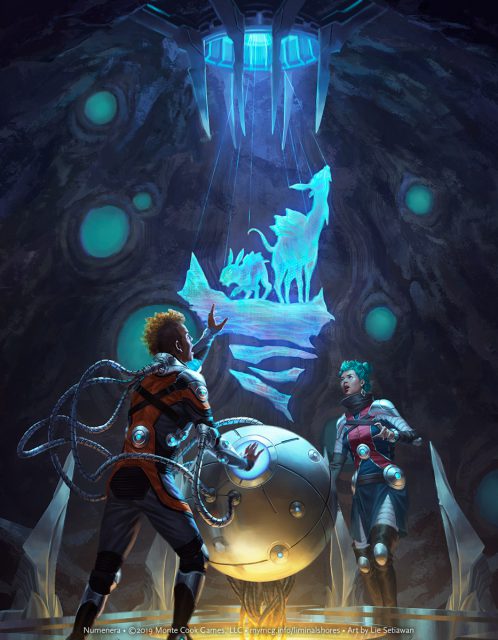 (Did you miss part 1 of Reach of Ghosts? Read it here!)

By the time the sun finally decides to make a brief appearance, the hot device has uncovered the top of something that looks like smooth white synth, about eighteen feet below the surface.

“I’m glad we didn’t have to dig this up with shovels,” Talrung says.

Nalliana’s extinguished the heat of the device, but it’s more than a half hour before it’s cool enough that Talrung lowers me down into the pit with a rope. I missed the white heat of the device when it was gone, but down in the pit, I welcome it back. Once at the bottom, I still can’t touch the exposed synth without gloves. It’s clear to me now that it’s the top of some kind of structure.

“That’s to be expected,” Nalliana shouts back down. “I’m going to join you.”

Talrung stays up top, probably already complaining about the cold, in case of trouble. Nalliana and I stand atop the synth panel, looking for seams, panels, or anything that might let us get in.

It takes a long time, but finally we both come upon something triangular right at the edge. I clear away more of the dirt and rocks with my knife. The heat had fused the edges of the pit, but after a few whacks it crumbles like brittle candy.

Eventually, my now-blunt knife chops away enough that we see what looks like—and I’m sorry for this—a sort of diamond-shaped nipple. I just don’t have a better word for it.

“This is it,” Nalliana says. She pulls a flexible metal cable out of the original device that led us here. The one she and Mal made together.

She plugs it into the diamond. She is clearly not entirely happy with the fit, and finally just holds it in place with one hand and manipulates some controls with the other.

I watch and think about how different her approach to this ancient magic is than Mal’s was.

She’s so hands-on, and he was so . . . cerebral. Funny to think about how people can be smart in different ways.

“How’s it going down there?” Talrung shouts.

“Almost there,” I shout back. I can sense his impatience. And his discomfort. For just a moment, I worry that he’ll be tempted to start up the heat device, but shake my head no. He’s an idiot, but he’s not that stupid.

Soundlessly, a portion of the white synth slides away, making a doorway where I would have bet shins there was no such door seconds before. But it’s right beneath Nalliana and it catches her by surprise as much as it does me.

She’s falling and I reach for her. My fist closes around the fur of her coat and the jolt I feel almost pulls the fur free, and then after almost pulls my arm from its socket. I have her, but the device falls into darkness and I hear a disheartening shatter.

I try not to think about it, but Nalliana does. “No!” She cries out. “Not the finder!”

“I’ve got you,” I say through clenched teeth, and grab her arm with my other hand, while stabilizing our weight with my foot braced against the side of this new opening.

“No, I can see the floor beneath me. It’s not far. I’ve got to check on the finder.”

I peer down and see that she’s right. It’s not too far down. But it is dark. We don’t know what’s down there.

“Just get me down there.”

She’s heavy, what with all the gear she’s carrying, so it’s not hard to agree. I don’t love having her go first—that’s usually my job when we’re exploring—but down she goes. She lands a bit clumsily, but on her feet.

I’m about to tear into my pack to see if I can get a torch lit, but she’s far faster as she activates a glowglobe.

“Dammit.” She’s looking down at the shattered pieces of her dropped device. I can hear her whisper, “Malrick,” but I’m not supposed to.

“Talrung! Make sure that rope’s secure.”

His face appears over the edge of the pit. He’s eating. “Where’s Nalliana? What’s that hole? What’s—“

“Is the rope secure?”

He says it is. And then he checks it. “Yeah,” he says again.

I grab the slack we’ve got here and lower down through the opening.

(Loving this story so far? Check back on August 13th for part 3 of Reach of Ghosts!)